Wins first major at The Masters 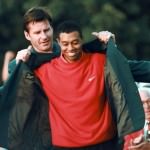 Woods wins his first PGA Tour major, taking The Masters by 12-shots in the tournament’s largest margin of victory ever. He becomes the first African American to ever win the event, posting this lowest four-round total ever at August National with a 70-66-65-69-270. After the event, he pays homage to the black golfer to play in the tournament before him:

I think that’s why this victory is even more special. Lee Elder came here today and that meant a lot to me. He was the first. He was the one I looked up to, Charlie [Sifford], all of them. Because of them, I was able to play here. I was able to live my dream because of those guys. They came down and inspired me. I knew what I had to do. It really reinforced what I had to go out there and try to accomplish.