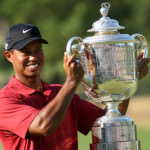 After a 1-over 71 on day one of the tournament, Woods ties the major championship record by shooting 63 on day two at Southern Hills Country Club in Tulsa, Oklahoma. He goes on to post 69-69 on the weekend and finish at 8-under, winning the PGA Championship by two shots over Woody Austin. It’s the second time Woods has successfully defended his title at the PGA, and the 13th major of his career.