Time names McGregor as one of the world’s 100 ‘most influential people’. Schwarzenegger writes his praise for the fighter.

Conor McGregor is more than a fighter, more than an athlete, more than a champion—although, as the first person in the history of the Ultimate Fighting Championship to hold titles in two weight divisions at once, he is clearly all of those things. Conor is also the rare personality who has become bigger than his sport. That lean, compact body must struggle to keep his enormous character inside. From the first time I met Conor, I knew he wasn’t the type of star you could box into one category. Since I’ve gotten to know him, I can tell you that what you see on the screen—the now familiar face of mixed martial arts—just scratches the surface. The Dublin native is razor-sharp, disciplined and charismatic. His energy is absolutely contagious, to the point where you almost start shouting in an Irish accent after 30 seconds of hearing that world-famous mouth.

Thank you @TIME magazine and @Schwarzenegger for including me in this years "TIME 100 Most influential people" list ? pic.twitter.com/bW9tsRoQHR

Time names Watson in its 100 list of top influencers primarily for her #HeForShe campaign. Watson’s international campaign calls for gender equality, even inviting men to give their support. Other actors on the list include Bradley Cooper and Julianne Moore. The magazine:

Her HeForShe speech at Davos was an Internet sensation, but unsurprisingly, it drew the typical antifeminist rants and even some threats. Watson chose to highlight the moving letters she has received from fathers who tell her they are investing new hope in the future for their daughters. But she was also frank about the bullying tactics of her detractors and one site that made an empty threat to release nude photos. Her confident and cool reaction: ‘If they were trying to put me off, they did the opposite.’ 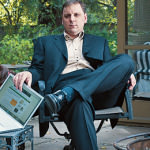 Huffington profiles Arrington for the magazine:

[He] is the quintessential blogger: intense, passionate, consumed with his subject, opinionated, sleep-deprived, forward-thinking, easy to irritate and apt to air his grudges in public.