What's this? This is an unbiased just-the-facts news summary about Halliburton, U.S. Supreme Court, extracted from the original article by Newslines' contributors. To see the newsline of each topic, click the links below. Learn more 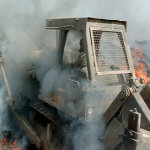 KBR asks court to hear suits that claim the government contractor and its parent company Halliburton operated U.S military burn pits in Iraq and Afghanistan negligently, which exposed soldiers to toxic fumes and pollutants. The contractors argue they are entitled to immunity from war-zone injury litigation just like the military. KBR counsel Mark Lowes says:

In Vietnam, people who were drafted, they drove the trucks, they did the laundry, cooked the food — all the things that have been outsourced by the Army were done by soldiers. I don’t see us ever going back [to that]. Contractors are going to be tied to the military from here on out, and it behooves the court to tell us how that relationship is going to work.