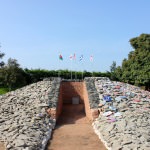 The Auld Acquaintance Cairn monument at Gretna village on the banks of the Sark river on the border of Scotland and England, built of stones collected from around the United Kingdom, reaches nine feet in height and 350 tons in weight. Among the stones collected by English and Scottish pilgrims to the site are some that have been carried across rough seas from remote Scottish isles or mailed from remote areas of England. A fragment of the Berlin Wall and a bit of rubble from a Glasgow house bombed during the Blitz have been added. Christine Bethune, a 63-year-old library assistant from Edinburgh adds a red and green stone:

It’s difficult to explain how moving it is. If you broke it, it wouldn’t be the same stone.

She explains that the monument is designed to emphasize the social ties between Scotland and Enland, aside from debates over policies and economics:

I’m English, but I’ve lived in Edinburgh for 40 years. I was married to a Scot. My children were raised in Scotland — one is voting ‘yes,’ the other would vote ‘no,’ but is living in London. I understand Scottish pride. I’ve lived with it for a long time. But I think it’s possible to be proud of your country without dividing the union.