Davis stars in this movie about Lila, a single mother whose son Stephon is killed in a drive-by shooting. When the police show little enthusiasm for solving the case, she joins a group of grieving mothers, where she connects with Eve (Jennifer Lopez), who has suffered a similar loss. The two set out to take revenge. The film is written by Pat Gilfillan and directed by Charles Stone III.

I completely drew on being a parent, and so did Jennifer. I have a friend, Julie Norris, who in 1988 lost a child to murder. She was a 7-year-old and she was playing in her grandma’s backyard in the middle of the day with her brothers and sisters and cousin. And her body was found and she’d been beaten, raped and strangled, and they found no clothes on her body. So I’ve been speaking to Julie as I was putting the project together. I always wanted to start from a place that’s real. The screenwriter spent two years with mothers of murdered children, and as a result, the experience felt like it was conveyed in a realistic way. 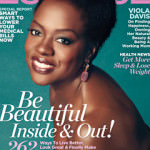 Davis appears on the cover of Essence magazine to discuss parenthood, her film Prisoners, and being called ugly as a child. On having a child:

And her image issues as a child:

My image of myself as a youth was in the mouths of young White kids calling me…ugly…and then going home to a mother who did not fully embrace her own beauty.

Davis is nominated for Best Actress at the 84th Academy Awards for portraying Aibileen Clark in The Help.

This second nomination will affect my career even more than the first one. Honestly, I can’t wait to get back to doing what I love: acting. On Feb. 27, when this is all over, I will get back to my life. I love the awards I’ve won, I’m so proud and happy to have received them, but I don’t take them to bed with me. All I am at the end of the day is an actor.

Davis wins the Tony Award for Best Actress (Play) at the 64th Annual Tony Awards for portraying Rose in Fences.

I don’t believe in luck or happenstance; I absolutely believe in the presence of God in my life. I still think God sent his blessings to the wrong house, but I’m gonna take him!

Davis is nominated for Best Supporting Actress at the 81st Academy Awards for portraying Mrs. Miller in Doubt.

I didn’t sleep all night. I screamed in my husband’s ear and drank some Champagne. When you’re acknowledged like this, you feel confident that you’ve reached people and you’re on the right path. That’s a basic need of any human being, especially when you’re living out a dream like I am.

Davis plays Mrs. Miller, the mother of a young boy enrolled in Catholic school, in this drama from John Patrick Shanley. Sister Aloysius Beauvier , the school’s principal, questions Father Flynn’s relationship with that student and recruits Sister James to monitor the priest’s actions. It is left up to the viewer to decide if her suspicions are correct or if she wants Father Flynn removed for her own reasons.

But I think it’s when Mrs. Miller comes in that you begin to understand that the argument isn’t just within these insular walls of this church, that it involves issues of rigid belief systems, and broadening your mind and your heart.

for giving me enough humility to know that I’m not one of the best, I’m just one of the blessed people in this business.

Viola Davis wins 2001 Tony Award for Best Featured Actress in a Play
Do you love news? Help us add and summarize the world's news. Find out more