West Ham win at home against Liverpool with goals from Winston Reid in the 2nd minute, Diafra Sakho in the 7th. Morgan Amalfitano seals the win two minutes to the end of the game. Liverpool manage to get one back through Raheem Sterling in the 26th minute. Alladyce:

To score two goals in that early period really stunned the Liverpool players. We really took them to task. We played outstandingly well and really didn’t let Liverpool play at all. Mark Nobel puts West Ham ahead in the 27th minute before Morgan Schneiderlin doubles for the opponents in the 45th and 68th minutes to put the Saints in control and it is not long before Graziano Pelle seals the lead with the third in the 83rd minute making sure Southampton emerge victorious. Allardyce:

I hope as well as his quality he will bring experience and leadership. I hope he will kick a few backsides on the pitch. It doesn’t appear like anybody is taking responsibility.

Spurs start the season with a 1-0 win over their local rivals. Despite having defender Kyle Naughton controversially sent off in the first half, new Head Coach Mauricio Pochettino keeps all his attacking players on the field.  A red card for James Collins in the second half makes it 10 vs 10 and Spurs snatch the points when debutant Eric Dier slots home in the final minute following a precise through ball from Harry Kane.

Cresswell signs with West Ham on a five year deal for £2 million. The highly rated defender has played 42 championship games and his squad number is 3.

In the third League Cup Final in five years to need a replay, Liverpool win the trophy for the first time.  After a 1-1 draw at Wembley, a crowd of 36,693 see goals from KennyDalglish and Alan Hansen clinch the trophy for the Merseysiders at Villa Park.

Goals from Brown, Clark, Kaye and Williams delight the majority of the 31,925 in attendance at the Hawthorns as the Baggies overturn the first leg deficit to lift the 1966 League Cup. A solitary reply by Martin Peters for the visitors is not enough to save the Hammers from a 5-3 aggregate defeat. This is the last League Cup Final to be played over two legs. 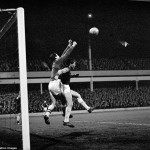 Goals from Johnny Byrne and England Captain Bobby Moore give the Hammers an edge in the first leg of the 1966 final.  Jeff Astle replies for the Baggies in front of 28,341 at the Boleyn Ground in East London.