Will Poulter born in London 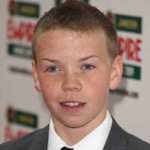 William Jack Poulter is born in Hammersmith, London, the third child of Caroline (nee Barrah), a former nurse, and Neil Poulter, a professor of medicine. He lives with his family in Chiswick, west London, and attends Harrodian School in Barnes. He has dyslexia and dyspraxia, and attends drama class due to academic difficulties. He has an older brother named Ed, an older sister named Jo, and a younger sister named Charlotte.

They’re the most incredibly supportive family. Telling my professor father that I wanted to tread the boards was interesting, but he was very cool about it. Charlotte has gone into medicine as well, and is a fantastic cook and amazingly intelligent and a great sports person. She’s an all rounder. My big sister is another one – she’s a fully qualified nurse. And my brother was a phenomenal sportsman who’s now in finance. Good looking. Built like nothing else. So they’re doing all right.