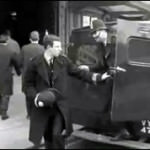 The £30,000 solid gold Jules Rimet trophy disappears while a church service is taking place in another part of the building. Thieves remove the cup from the Sport with Stamps display at the Stampex exhibition, but stamps worth £3m were left behind. Vice-chairman of the Football Association Council, Jack Stewar was reluctant to accept blame for the trophy’s disappearance but said:

Police are looking for a suspicious man in his early 30s, of average height with thin lips, greased black hair and a possible scar on his face.