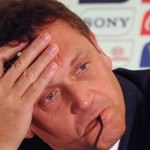 President Dilma Rousseff signs a law allows sales of beer at soccer matches. The law covering the 2013 FIFA Confederations Cup and 2014 World Cup removes a ban on alcohol in stadiums that has been in place since 2003 to combat hooliganism, although state governors may still enforce the ban based on state legislation. Budweiser is a major World Cup sponsor. FIFA Vice President Jerome Valcke on a visit to the tournament host cities:

Alcoholic drinks are part of the Fifa World Cup, so we’re going to have them. Excuse me if I sound a bit arrogant but that’s something we won’t negotiate. The fact that we have the right to sell beer has to be a part of the law.