The Maracana is invaded 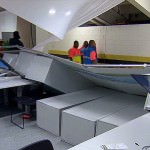 for a second time ahead of the Chile-Spain match. Around 100 supporters, most of them wearing the red of the Chilean national team, breach security barriers and infiltrate an X-Ray zone where media enter the stadium. The fans run past the escalators that lead to the seats and damage the media center, smashing a glass door and knocking over two partition walls and three television sets. A fan sought gaps in security after coming to the match prepared to pay $800 for a black-market ticket and finding the cheapest available is $1,500:

I saw both goals. The crowd was fantastic. I travelled 7000 km by car. I left Santiago and came to Rio de Janeiro because of this Cup. There was no way I was going to miss the game against Spain.