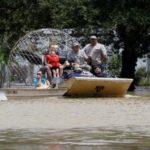 The death toll from historic flooding in Louisiana climbs to eight, as the expanding flood zone prompts authorities to declare disasters in 20 parishes of the state. While flooding receded in parts of southern Louisiana, other areas saw rising waters. The National Weather Service issued renewed flood warnings. 40,000 homes have been impacted by the floods and more than 8,000 people were in shelters. More than 20,000 have been rescued or evacuated. Louisiana Governor Edwards: