What's this? This is an unbiased just-the-facts news summary about 2016 Summer Olympics, extracted from the original article by Newslines' contributors. To see the newsline of each topic, click the links below. Learn more 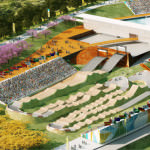 Work begins on Rio 2016’s Deodoro Olympic Park. This will be the second largest park of the 2016 Games.The site is divided into north and south regions, separated by a railway line. Today’s construction began on the north region. Construction in the south region will begin by August. Rio 2016 President, Carlos Nuzman, says

This is a very important day. We are very proud to see work start on Deodoro Olympic Park. It underlines the important legacy that the Pan-American Games left to Rio, and the new confidence in the success of the Rio 2016 Olympic and Paralympic Games. Today, Brazil has a highly positive image due to the FIFA World Cup, and I’m certain that our Games will be no different.

The park is slated to be completed in early 2016.