In a sketch for the show, Sandler and Barker resume their brawl from Happy Gilmore. While Sandler is visiting Barker in the hospital, Barker starts berating Sandler for not putting him in more films. The visit quickly devolves into a brawl. Barker:

You’re looking chunkier than the soup.

Sandler is first on Forbes‘ list of Hollywood’s most overpaid actors for a second consecutive year. Forbes:

We estimate that for every $1 Sandler was paid, he returned an average of $3.20.

Sandler accepts the Ice Bucket Challenge from various people and now passes the challenge on to Shack, Betty White and Macaulay Culkin.

Sandler makes a promotional appearance on Norm MacDonald Live to promote Blended. While there Sandler was questioned about why he will never host the SNL show.

Sandler stars with Drew Barrymore in Blended, about two parents who take their family on an African Safari and share a resort suite with another family. Talking with Barrymore:

Yeah, that’s right. We loved that lake. Yeah, I could see doing an On Golden Pond kind of movie. That would be great, but maybe with a few more jokes in there. We both have new things going on in our lives since “The Wedding Singer” to “50 First Dates” to now. We both have families, but we’ve always stayed in touch. We’ve always been good friends and we check in on each other as much as possible. No matter what’s going on, I’m always pulling for Drew, and I feel the same about her. Whenever I’m doing something, I know she’s pulling for me. We just have a nice friendship

I have done that since ’50 First Dates. It was written in another place. I said imagine if we did it in Hawaii, how great that movie would be. And they said, ‘Yeah, that’s a very artistic idea’. I’ve been doing that ever since.

New Sandler video gamed themed film Pixels is set for release on May 15, 2015.

When aliens misinterpret video-feeds of classic arcade games as a declaration of war against them, they attack the Earth, using the games as models for their various assaults. President Will Cooper has to call on his childhood best friend, ’80s video game champion Jules Brenner, now a home theater installer, to lead a team of old-school arcaders to defeat the aliens and save the planet.

Sandler and Barrymore sing about being in a romantic comedy together every ten years while Fallon plays the guitar. Seacrest interviews Sandler during On Air With Ryan Seacrest about his film That’s My Boy.

That’s My Boy,’ that came to our office, just a script that people in my office loved and bought. Andy Samberg called me up and kept telling me: ‘If you do that movie, I’d love to play your son.’ I kept going: ‘What movie is he talking about?’ Then finally, I read it and I loved. It’s a pretty crazy movie and it’s got some funny stuff that is very dirty and filthy, but pretty warm at times. I connected with it, and I was laughing at it, and that’s why I got excited to do it.

Sandler stars in That’s My Boy a film about a middle-aged father who is stuck in the 80’s. The film co-stars Andy Samberg.

It was fun to speak the way I speak in my bathroom. I grew up cursing a lot and it felt natural. And then my parents yelled at me and told me to stop and they weren’t enjoying my albums. They weren’t enjoying a lot of things I did with my life. Then my father passed away and he’s not here to yell at me anymore. So my mother I bully her I say, Here comes some more dirtiness. Sit and enjoy it.  And that’s what we did.

Seacrest interviews Sandler during On Air With Ryan Seacrest about dressing up as a woman for his role in the film Jack And Jill.

The bra digging into the back and the eyelashes were the pain in the butt the most. I shaved them up nice and made them pretty for Pacino. He’s a really funny guy and he just is a really cool guy to hang out with. He looked cool, he’s in a leather jacket, he looks like Al Pacino. I walk out dressed as a woman, considering how ugly I looked, it was weird.

Sandler is honored with a star on the Hollywood Walk of Fame under the category of Motion Pictures. There to celebrate with the actor are his friends Henry Winkler and Kevin James.

This is a big deal. I feel honored and can’t believe this has happened in my life. 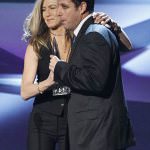 Starring with Kevin James, Chris Rock, and David Spade, Grown Ups is a comedy about five best friends who reunite for the Fourth of July weekend to meet each others’ families.

Me and Fred Wolf wrote the movie. The whole idea was about putting together old friends that get to hang out for a weekend. These guys are my old friends, so it made total sense. I’m glad they said yes to it 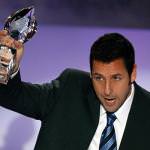 Sandler co-writes, co-produces, and stars in this comedy film directed by Dennis Dugan. He plays Zohan Dvir, an Israeli counter-terrorist agent who stages a fake death in order to escape his country and chase his dream of being a professional hairstylist in New York City. He co-stars with John Turturro, Emmanuelle Chriqui, and Nick Swardson.

We were getting ready to do the movie right before 9/11, so we knew not to do it then, it would be ridiculous. And as the years went on, we would talk about, “maybe we should do that movie, maybe it’s a good thing to talk about that subject.”

Sandler stars in this remake of the 1974 movie of the same name. He plays Paul Crewe, a former NFL quarterback who ruins his reputation by shaving points in a championship game. He is sent to a Texas jail for drunk driving and is blackmailed by the warden into training the inmate football team in order to be beaten by the guards. He co-stars with Chris Rock, Burt Reynolds, and Nelly.

Yes, I did play football, I was in the North Bulldogs. I was actually a very good quarterback until Shawn Wallace came and moved to town and eh took over for me, and he kinda stopped me from playing.

Sandler stars in this offbeat romantic comedy directed by Paul Thomas Anderson. He plays Barry Egan, a depressed toilet plunger businessman who has a passive-aggressive relationship with his sisters. He meets and falls in love with Lena, played by Emily Watson, but gets into trouble after calling a phone sex line and running into a goon. Co-starring Philip Seymour Hoffman, Mary Lynn Rajskub, and Luis Guzman. On getting the role:

Paul called and asked to come and hang out. We were shooting Little Nicky at the time, and Paul comes over, hangs out, we hung out for about five hours, and he just talked about some of the stuff I’ve done in the past, and he’s a Saturday Night Live fan, we talked about that stuff. And I just thought he was a great guy.

Sandler co-writes, co-produces, and stars in this comedy film directed by Steven Brill. He plays Nicky, the third and youngest of Satan’s sons. His father is set to choose which one of his sons is the rightful successor to his throne, and his brothers are determined to do everything to grab that title. Co-starring Harvey Keitel, Patricia Arquette, and Rhys Ifans.

I like playing characters who get insulted a lot and who lose their temper because of it or can’t think of a snappy comeback. But you’re right-I do like snapping and yelling, it’s part of my comedy. Sometimes when I’d snap in my house growing up, it would make my dad laugh. Or sometimes, he’d smack me.

Sandler plays Bobby Boucher, born in Louisiana who lives with his mother (Kathy Bates). Boucher is a waterboy for the local college football team who gets ridicule from the players and the coach.

Sandler plays Billy Madison in this comedy directed by Tamra Davis. Madison is the spoiled and lazy son of a hotel mogul. Before he can take over the family business empire, his father challenges him to go back and do all the school work that he missed over the years – starting from kindergarten and stopping at each grade after that. Also starring Bridgette Wilson and Norm MacDonald.

It was the first one, it was the one that got my own vision out there. It was my mother’s favorite one.

I don’t know if Mo was that excited about what I wanted to do — recording a stand-up set is a lot cheaper. And I think it’d been awhile since Mo had heard something like the Cheech & Chong or Derek and Clive albums that I liked. But Mo said he knew this guy Brooks who could help me.

What's this? This is an unbiased just-the-facts news timeline ('newsline') about Adam Sandler, created by Newslines' contributors. Help us grow it by finding and summarising news. Learn more