Executive producer, Williams responds to fans reactions regarding Lifetime’s Aaliyah: Princess of R&B biopic. People are talking about the movie and the ratings are a huge success.

I see my Aaliyah movie broke the Internet this weekend! Errbody got an opinion. Well, I must tell you, whether you loved or hate, you watched. It was the second-highest rated movie on all of cable this year so far.

Lifetime’s Aaliyah: Princess of R&B biopic executive producers Chase and Farley defend their choice to include the controversial marriage between R.Kelly and Aaliyah. They argue that Kelly was a part of Aaliyah’s life and an important influence. Chase:

The evidence is there that they were married, we tried to keep it very tasteful and respectful in our portrayal. Biopics are hard people have an opinion and social media allows them to voice that opinion. But at the end of the day, our goal was to make the best movie possible.

We’re trying to honor this woman and tell this story of this journey and her overcoming obstacles. We felt we had enough of the music to still make a terrific film, and we’re excited to tell the story we were telling.

Lifetime Network releases the official movie trailer for Aaliyah: The Princess of R&B. Shipp portrays the late singer Aaliyah. Rachael Crawford, Sterling Jarvis and A.J. Saudin also star in the film. The biopic is based on the Christopher Farley book, Aaliyah: More Than a Woman, which follows Aaliyah’s journey from Star Search, to her rise to fame and finally, her tragic passing. Lifetime TV Network:

She sold millions of records and was a budding silver screen star. Yes, Aaliyah was definitely more than a woman. 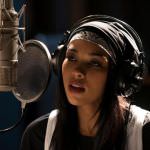 The Lifetime Network continues on with the Aaliyah biopic, Aaliyah: Princess of R&B , with Shipp as Aaliyah. The official air date is November 15, 2014. Lifetime had originally planned to shoot over the summer and release this fall, until Disney star Zendaya Coleman backed out of the project citing poor production values and moral discord.

What's this? This is an unbiased just-the-facts news timeline ('newsline') about Alexandra Shipp, created by Newslines' contributors. Help us grow it by finding and summarising news. Learn more