The trailer for Batman vs Superman: Dawn Of Justice is released to a standing ovation during the film’s Comic-Con panel. The trailer shows Cavill as Superman and Affleck as Batman. Adams is Lois Lane, Eisenberg is Lex Luthor and Gadot plays Wonderwoman. The film is directed by Snyder.

Black and blue. God versus man. Day versus night. 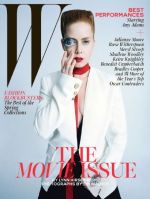 Adams appears on one of seven covers of the February 2015 issue of W magazine. 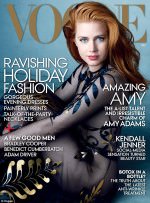 Adams appears on the cover of the December issue of Vogue.  Adams says she had a bit of a meltdown over turning 40 in August.

I was like, “I’m 40 and I still care what people think of me; I still don’t do laundry so I’m always out of things; I’m just not a grown-up at all,” and I had this expectation that I would be by this age. It wasn’t, “Oh, I’m getting old and I’m going to lose something vibrant about myself.” It was more that I was just so disappointed with myself. It’s just awful. Any chance for self-loathing! 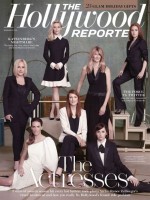 Adams is nominated for Best Actress at the 86th Academy Awards for portraying Sydney Prosser in American Hustle.

Making Hustle was very challenging, so it’s really nice that people not only recognized the film but all the actors as well.

I never fought for or against playing a sexual or sensual woman, it’s just there hadn’t been one offered to me that felt like it came from an authentic place and wasn’t there just to serve the male characters. 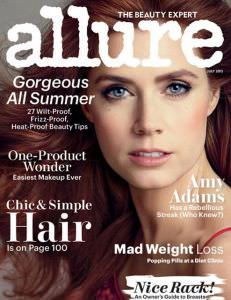 Adams appears on the cover of the July 2013 issue of Allure magazine. She talks about being a blank canvas and getting married.

There is a point to it. We both have a very specific idea that we want to do this [the ceremony] in spring or fall, like in those months, but every time I’m busy working. I want something very family oriented and laid-back.

Adams plays Lois Lane, intrepid reporter, in this adventure fantasy written by David S. Goyer and directed by Zack Snyder. After Earth is invaded by General Zod and his followers, Superman must save the world with Lois at his side. Co-starring Henry Cavill, Michael Shannon, and Russell Crowe.

I’ve always really loved action films, but I don’t see myself as a superhero girl, so my Lois is a mere mortal—full of imperfections. She’s someone I identify with. So this was an opportunity to be in a genre film without having to train—which was a positive thing.

Adams is nominated for Best Supporting Actress at the 85th Academy Awards for portraying Peggy Dodd in The Master.

It is such an honor to receive this recognition from the Academy. Working with Paul Thomas Anderson was a unique and wonderful opportunity that I am so grateful for.

Adams is nominated for Best Supporting Actress at the 83rd Academy Awards for portraying Charlene Fleming in The Fighter.

I don’t know exactly how I got here but I feel really fortunate to be here.

Adams plays Julie Powell in this biographical drama from Nora Ephron. As Powell challenges herself to cook all the recipes in Julia Child’s Mastering the Art of French Cooking, we see her struggle interspersed with Julia Child’s rise to cooking stardom.

I was very grateful that my character wasn’t about her physique. Let’s just put it that way.

Adams is nominated for Best Supporting Actress at the 81st Academy Awards for portraying Sister James in Doubt.

Adams plays Sister James, a young teacher at a Catholic school, in this drama from John Patrick Shanley. Sister Aloysius Beauvier, the school’s principal, questions Father Flynn’s relationship with a male student and recruits Sister James to monitor the priest’s actions. It is left up to the viewer to decide if her suspicions are correct or if she wants Father Flynn removed for her own reasons.

Adams plays Bonnie Bach, administrative assistant to Texas congressman Charlie Wilson, in this drama directed by Mike Nichols. Wilson teams up with a renegade CIA agent and a Houston socialite to assist Afghani rebels in their war with the Soviets. Their efforts contribute to the fall of the Soviet Union and the end of the Cold War.

It was so much fun. Just to be on that set and learn from these people and get to watch Philip Seymour Hoffman and Tom Hanks do these amazing scenes together, directed by Mike Nichols, it was for me like going to school.

What's this? This is an unbiased just-the-facts news timeline ('newsline') about Amy Adams, created by Newslines' contributors. Help us grow it by finding and summarising news. Learn more