Arquette wins the Oscar for best supporting actress for her role as a single mother in Boyhood. Arquette calls for wage equality in her acceptance speech.

To every woman who gave birth, to every taxpayer and citizen of this nation, we have fought for everybody else’s equal rights. It’s our time to have wage equality once and for all and equal rights for women in the United States of America. 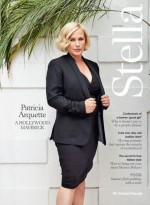 Arquette appears on the cover of a July 2014 issue of Stella UK magazine.

The split is completely amicable and their prime focus is their daughter. They ask that their privacy be respected at this time. Arquette appears on the cover of the May 2002 issue of Paper magazine. Arquette appears on the cover of the March 1998 issue of Total Film magazine. Arquette appears on the cover of the December 1996 issue of Harpers and Queen magazine.

What's this? This is an unbiased just-the-facts news timeline ('newsline') about Patricia Arquette, created by Newslines contributors. Make it grow it by finding and summarising news. Learn more