Swank appears on the cover of the February 2015 issue of Interview Germany magazine. 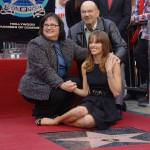 Swank is presented with her own on the Hollywood Walk of Fame for her work in the category of Motion Pictures. Her mother and grandfather attend the ceremony in support of Swank.

I remember my mom using a roll of quarters to call agents from a pay phone and telling agents they should sign me.