What's this? This is an unbiased just-the-facts news summary about Angela Corey, Michael Dunn, extracted from the original article by Newslines' contributors. To see the newsline of each topic, click the links below. Learn more

Guilty on three of four counts 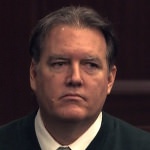 Michael Dunn is found guilty on three counts of attempted 2nd degree murder. A mistrial is declared on 1st degree murder charge. The jury is sure Dunn sprayed the SUV with four teenagers inside with nine bullets before driving away, but are not able to agree whether to convict in the death of Jordan Davis. Dunn claims the teen’s loud music made him feel threatened and he had “no choice’ but to kill the teen.