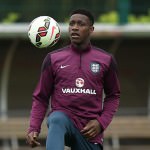 Welbeck signs a long-term deal with Arsenal from Manchester United for £16 million. The England international has made 142 appearances for his former club, scored 29 goals and has been capped 26 times. He was asked to leave Manchester pending the arrival of Radamel Falcao. Club statement:

Everyone at Arsenal welcomes Danny to the club and looks forward to his contribution in an Arsenal shirt this season.