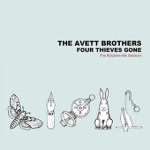 The band releases its fourth studio recording, produced by Ramseur Records. The album is recorded in a home-made studio, as described in the liner notes on the album cover:

The songs herein are the result of two weeks spent in the very western part of North Carolina. In a house by a lake, we spent our days and nights realizing and recording these, our most current chapter of songs. We made the building our studio; piano by the sliding glass doors, drums in the dining room, cables on the carpet, microphones from the ceiling. We found the feeling there and we hope and believe that you will hear it. Of the 31 tracks recorded, 17 appear on the album.