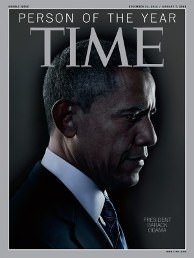 Obama is chosen as Time’s Person of the Year for a second time, due to his achievements in changing the face of America. The magazine notes that Obama is the first President since Franklin Delano Roosevelt to win more than 50 percent of the vote in two straight elections. Runners-up are Pakistani female education activist Malala Yousafzai, Apple chief executive Tim Cook, Egyptian President Mohamed Morsi, and atomic physicist Fabiola Gionetti. A spokesman for Time::

In 2012, he found and forged a new majority, turned weakness into opportunity and sought, amid great adversity, to create a more perfect union.