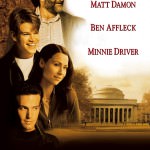 Affleck co-stars as Chuckie Sullivan in the Gus Van Sant-directed Boston location drama, based on a screenplay he wrote with Matt Damon, who plays Will Hunting. As Will attempts to find himself, Chuckie encourages him to use his intellectual talents and mathematical ability to seek a better life. He tells Will that it is an insult to waste his intelligence as a university janitor and says that although they are best friends, he hopes one day he will stop by Will’s apartment for a beer and he will no longer be there. Also starring Robin Williams, Minnie Driver, Stellen Skarsgard, Cole Hauser, and Casey Affleck. On shooting in Boston:

Ben Affleck talks to Joe Leydon about "Good Will Hunting"
Add your comments below...