After The Dance revival 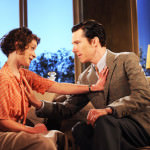 in the National Theatre’s revival of the 1939 drama After The Dance. He performs the role of David Scott-Fowler, a man given over to enjoying the frivolity and pleasures of life. Believing that his marriage was one made for amusement rather than love, David is unaware of the fact that his wife has actually fallen in love with him and longs to leave the life of empty pleasure behind. The show is a commercial and critical success, winning four Olivier Awards, including Best Revival.