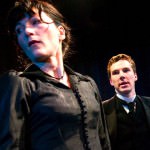 The actor performs the role of George Tesman in Hedda Gabler at the Almedia Theatre. He continues this role when the show is transferred to the West End. This performance marks Cumberbatch’s first West End appearance. He is nominated for an Olivier Award for Best Performance in a Supporting role.