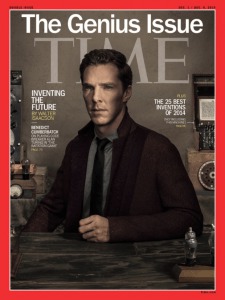 Cumberbatch appears on the cover of Time magazine’s annual “genius” issue as Nazi code breaker, Alan Turing, who he portrays in The Imitation Game. Cumberbatch discusses his admiration of Turing.

This man’s achievements are extraordinary. Everything that’s been thrown at computers—all of it has only managed to work because of his idea of creating something universal in the first place.