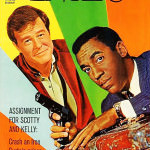 Cosby becomes the first African-American actor to be cast in an episodic television series when he stars in I Spy, about two American agents facing, funny but skillful espionage adventures. Cosby plays Alexander Scott,  his partner’s trainer and a language expert. Co starring Robert Culp

People writing and people news said that I was the Jackie Robinson of television drama.