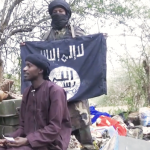 Boko Haram releases a new video in Nigeria, with leader Shekau again failing to appear in it. His continued absence increases speculation that Shekau is in deep hiding, or has been killed.. In the eight-minute video, an unidentified young man speaks in the name of the Islamic State in West Africa calling on people to be patient:

We are still present everywhere we had been before.

The man speaks in the regional Hausa language, with subtitles in Arabic and English. The video shows the militants attacking a security checkpoint, seizing weapons, and slitting the throat of a man dressed in a police uniform.