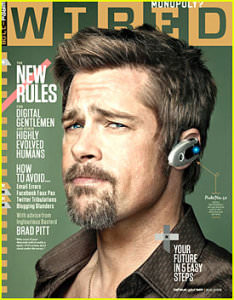 Pitt appears on the cover of the August 2009 issue of Wired magazine. He talks about tweeting pictures of his wife’s butt, lying on online dating profiles, and talking on the phone while using the washroom.

No, you can’t talk on the phone! Do you want the guy next to you to hear your entire conversation? That’s why you should only text in the bathroom. Just be sure you don’t hit the wrong button and end up putting a photo of your junk on Twitter. Trust me, you don’t want those followers.