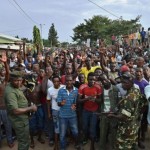 Protesters battle police in violent anti-government demonstrations, as security forces try to stem unrest. At least two protesters are shot dead and eight are wounded in clashes with police in the capital, Bujumbura. Defence Minister Ntahonvukiye calls for unity in the wake of the abortive coup, which was crushed by loyalist forces after street fighting between rival factions. Military statement:

The survival of Burundi as a nation depends on the cohesion of the army.