Perriello, US Special Envoy for the Great Lakes Region of Africa,  Thomas Perriello says there is a need for both the government and its opponents to be committed to negotiations in a bid to resolve the crisis in Burundi.

We are deeply concerned about the political crisis and the humanitarian crisis. We still believe there is a path forward, but it has to be one in which all Burundian leaders agree to a political dialogue, and the important leadership that the region has shown, through the East African Community, resumes with some urgency to address a situation where you’ve seen approximately over 200,000 [refugees] already and ongoing sporadic violence…Burundians need to continue to hear those calls for calm and the path forward. The United States and the international community are ready to support the regional leadership to force this political dialogue forward that is so important. The point of the dialogue is to address these extremely difficult questions that continue to remain under the surface of the political crisis. But, people need to come to the table. We’ve seen very constructive steps forward when the East African Community and South Africa and others have been a constructive part of this. So, we are eager to resume that and stand ready to support it.

In a meeting with Rwandan President Kagame, Bathily, Special Representative and Head of the UN Regional Office for Central Africa, reiterates the UN Secretary-General’s condemnation of the current violence in Burundi. Bathily will continue to hold consultations with political parties, civil society and religious organizations, government officials and the diplomatic community, with the view to reconvene the political dialogue as soon as possible. Bathily:

[The situation in Burundi is accumulating] the well-known and visible marks of a society which previously suffered divisions leading to grave violence. Currently the humanitarian crisis caused by the escalating political tensions in Burundi has worsened, and uptick in the number of refugees seeking asylum and a deterioration in health conditions at refugee camps receiving them.

In response to a question from the Inkatha Freedom Party, who cites Burundi as an example, Zuma says he tried to dissuade Nkurunziza from seeking a third term but hit a wall when his pleas were ignored.

Many of us interacted to say that might not help the country. We cannot say there was no effort to solve that African problem. I sent an envoy. He said it is not going to cause trouble, he has taken a decision and the constitution is on his side. Once you have reached that stage… when an African leader is not interested, that becomes difficult…No military men can take over as they please. There are a few exceptions. Burundi, where even its own regions could not persuade it … but even there the man is not saying he is going to stay forever… he has argued the point through the constitution and the court has supported him. We can’t force people, we have to talk to them, nudge them.

He says leaders have to respect the sovereignty of other African nations while they try to resolve problems.

It does not mean we will solve all matters at the right time…we are not going to ride roughshod over constitutions.

Harerimana, president of the CNDD FDD chapter in Kanyosha, is attacked and killed in Bujumbura. He is heading to his office on the back of a motorbike when a crowd throw stones at him, pull him off the bike and shoot him.

Nshimirimana is killed, along with three bodyguards, in a rocket attack on his car in Bujumbura. Nshimiramana was widely seen as the central African nation’s de facto internal security chief and considered by some as the president’s effective deputy. He was seen as the mastermind behind the crackdown on the protests as well as a key player in foiling the coup attempt. The presidency’s communications chief:

I have lost a brother, a companion in the struggle. The sad reality is that General Adolphe Nshimirimana is no longer with this world.

Senator Leahy, in a statement titled, Buhari’s Mis-Directed Criticism of the Leahy Law on Human Rights, says President Buhari should clean up military units allegedly implicated in atrocities in order to get more military support from US instead of rebuking the Leahy Law. He charges Buhari to direct his attention to and clean up the units implicated in such atrocities.

It is well documented by the State Department and by respected human rights organisations that Nigerian army personnel have, for many years, engaged in a pattern and practice of gross violations of human rights against the Nigerian people and others, including summary executions of prisoners, indiscriminate attacks against civilians, torture, forced disappearances and rape. Rarely have the perpetrators been prosecuted or punished. This abusive conduct not only violates the laws of war, it creates fear and loathing among the Nigerian people whose support is necessary to defeat a terrorist group like Boko Haram. President Buhari ignores the undisputed fact that most Nigerian army units have been approved, under the Leahy Law, for U.S. training and equipment. Only those particular units against which there is credible evidence of the most heinous crimes are ineligible for U.S. aid. And even those units can again become eligible if the Nigerian Government takes effective steps to bring the responsible individuals to justice.

I strongly agree with President Buhari about the need to defeat Boko Haram, and I have supported tens of millions of dollars in U.S. aid to Nigeria for that purpose. But rather than suggest that the United States is at fault for not funding murderers and rapists in the Nigerian military, he should face up to his own responsibility to effectively counter Boko Haram.

Ndereyimana. a member of Rwasa’s FNL political group, who had been organizing protests, is shot dead outside his parent’s house in the Kinama area and then his attackers, believed to be from the government youth wing, Imbonerakure, throw a grenade at his body.

[The Secretary] calls on the authorities to do all in their power to ensure security and a peaceful atmosphere during the election. He further calls on all parties to refrain from any acts of violence that could compromise the stability of Burundi and the region. [The pause in the inter-Burundian dialogue] took place without agreement being reached on a range of issues that would have contributed to the creation of a climate conducive to the holding of credible and peaceful elections, as contained in the relevant recommendations of the EAC and the African Union.

Ntavyohanyuma, the head of Burundi’s parliament, says he has fled the country for Belgium due to violence

The Roman Catholic Church of Burundi announces that it will withdraw its priests appointed to help organize the elections at the heart of the political upheaval in the country. 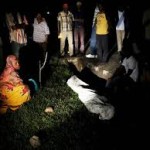 Feruzi, leader of opposition UPD-Zigamibanga party, is killed in a drive-by shooting by unknown assailants in the nation’s capital, Bujumbura. Feruzi is outside his house when a car approaches and its occupants sprayed him with bullets. At least one of his bodyguards also died. The presidential office expresses shock at Feruzi’s killing and denies any role

The United States issues a travel warning for Burundi, telling its citizens not to go there and urging those in the country to get out as soon as possible. It says it orders all non-emergency US government personnel and dependents of American staff to leave Burundi.

US citizens should shelter in place until it is safe to move about, ensure that your travel documents are up-to-date, and confirm that air and land borders are open before attempting to depart the country.

A group of soldiers mutinied this morning and made a fantasy declaration of a coup d’etat. This attempted coup was foiled and these people … are sought by defense and security forces so they are brought to justice.

Belgium suspends aid to Burundi, the first country to pull funds due to violent clashes in the African country, after concluding that current conditions do not allow election candidates to campaign. Belgium had pledged four million euros to assist with the organisation of the forthcoming elections — of which a 50 percent tranche has already been paid. The country will also pull out of a five million euro police cooperation deal, which it has in place jointly with the Netherlands. Belgian minister:

In the current circumstances the payment of the remaining two million can only be put on hold.

Burundian opposition leaders call for the EU to suspend €8m of financial assistance and to demand that the government postpone the election. The EU is the main financial contributor to the Project to Support the 2015 Electoral Cycle in Burundi. Alliance for Democratic Change (ADC-IKIBIRI) spokesperson:

We believe the EU’s €8m is a considerable sum. It is shocking that the EU is financing these elections which are killing people, forcing voters of the opposition to flee the country like refugees…It would be unacceptable for the European taxpayer to agree that €8m, which can be used for something else, should be thrown in the trash like that. If these elections are forced to happen, there will be a civil war…Radios have been closed, human rights activists have been imprisoned and these prisoners are refused food and care, are being tortured to the indifference of the international community. The violation of these values ​​must be unacceptable for Europeans partners.

The US appeals for African leaders to desist from changing constitutions to ensure them more than two presidential terms. During a discussion on Burundi’s upcoming election, Deputy Assistant Secretary Gilmour reminds African governments that are part of the Arusha agreements of the commitments they made. This includes presidential terms limited to two years.

It is not a good idea to violate the agreed upon commitments to the Arusha-agreement. I’m calling on Burundi to proceed peacefully and we are hoping for a free and fair election.

Britain warns its citizens to avoid all but essential travel to Burundi.