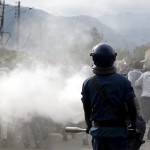 There are clashes between hundreds of protesters and armed police in Burundi’s capital, Bujumbura over the nomination of President Nkurunziza to run for a third term, despite a constitution that stipulates the president can only serve for two terms. Nkurunziza’s party says he is eligible for another term as popularly elected president. The president’s backers argue that his first term should not count since he was picked by lawmakers rather than voted in. US State Department:

With this decision, Burundi is losing an historic opportunity to strengthen its democracy by establishing a tradition of peaceful democratic transition.