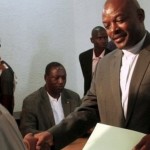 Nkurunziza launches his third-term bid in the capital Bujumbura, defying criticism from the African Union (AU) and the US. He denies suggestions that violence is spiralling out of control. The president compares his country’s situation with Nigeria, where he says polls had gone ahead despite there being no security because of the insurgency by Boko Haram Islamist militants.

Burundians have no problem with elections…because 99% of the country is peaceful…These demonstrations have turned into insurrection, but it is something that will be controlled… and I assure you that the elections will go well.