Fiorina appears at the third Republican presidential debate in Boulder, CO, hosted by CNBC. She defends her record as CEO of Hewlett-Packard, says a minimum wage is unconstitutional, and calls out Hillary Clinton and President Obama on their policies towards working women.

It is the height of hypocrisy for Mrs. Clinton to talk about being the first women President, when every single policy she espouses, and every single policy of Barack Obama, has been demonstrably bad for women. 92% of the jobs lost duringBarack Obama’s first term, belonged to women… Three million women have fallen into poverty under this administration. The number of women living in EXTREME poverty is the highest on record.

Planned Parenthood supporters and Code Pink activists scream insults and throw condoms at a Fiorina event, a tailgate before a Hawkeyes game in Iowa. Fiorina talks about her with one protester:

She came on and said she was concerned about women’s health and as a cancer survivor I said, I was too. And, she said she was concerned about women’s rights and I said I was too. I said you ought to do a little fact-checking before you come out here and shout propaganda… Taxpayers fund Planned Parenthood and Planned Parenthood funds pro-abort Democrats. It’s a big shell game.

CNN changes its rules so that Fiorina can participate in the second GOP debate on September 16. The original rules discounted Fiorina because the average of polls conducted between July 16 and Sept. 10 minimized the significant rise in Fiorina’s numbers since her performance of the first non-prime-time “undercard” debate of longshot contenders.

Perry, Santorum, Jindal, Fiorina, Graham, Pataki and Gilmore will not appear in the GOP presidential debate in Cleveland, OH. They are below the threshold set by the average of of five recent national polls to calculate the top 10 candidates.

Fiorina calls on Obama to release the text of the trade deal:

Of course, I support free and fair trade. But President Obama has made lofty promises before and we’ve learned with this White House that the devil is in the details. And the details are frequently very different than the lofty goals with which he describes the deal. So I’d like President Obama to tell us what’s in his trade deal before we grant him this broad fast track authority. So far, though, he’s been unwilling to do that and Hillary won’t even take a position on it. That should concern us. Mr. President, if you want TPA to pass, please just tell us what is in TPP.

Fiorina tweets a photo of a military cemetery and a message for Memorial Day.

This Memorial Day we pause to remember and commemorate all those who have given so much to defend this blessed nation.

This Memorial Day we pause to remember & commemorate all those who have given so much to defend this blessed nation. pic.twitter.com/YwRPzIYQz3

Yes, I am running. I think I’m the best person for the job because I understand how the economy actually works. I understand the world; who’s in it.

She also criticizes Hillary Clinton saying  she is “clearly is not trustworthy.”

She has not been transparent about a whole set of things that matter.

A video posted on her campaign website, carlyforpresident.com, starts with a shot of Fiorina watching Clinton’s campaign announcement video. 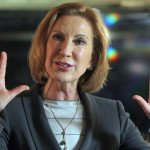 Ten days ago now, while I was in New Hampshire … I got asked by a reporter … whether a woman’s hormones prevented her from serving in the Oval Office. Can anyone here think of a single example where a man’s hormones might have clouded his judgment — including in the Oval Office? I know you laugh, but you know it’s true. There are loads of examples.

She criticizes Hillary Clinton for once calling Syrian President Bashar al-Assad “a positive reformer.” She adds: 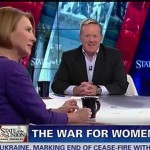 While interviewed on CNN’s State of the Union, Fiorina says she supports the Supreme Court’s decision giving employers the right to not cover certain types of birth control.

Fiorina heads the new PAC called the Unlocking Potentials program, a GOP initiative intended to draw more women to the party during the midterm elections and narrowing the gender gap.

[Fiorina will work to] develop and shape messaging on a wide range of issues that directly relate to independent female voters. . . We have studied the successful campaigns and movements that have applied targeted and personal grassroots efforts to stimulate positive action. They focus on real interactions; door-to-door and person-to-person contacts, and not just television advertising.

Fiorina joins the advisory board of Americans for Economic Freedom.

As a businesswoman, I’m proud to stand with an organization that values and understands the prosperity that is created through smart economic policies. I look forward to working with AEF to increase our understanding of how to create American jobs and focus on economic growth. 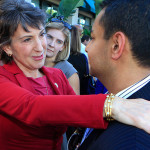 We had an exceptional campaign. In the end we could not overcome the registration that Democrats have, and in particular in L.A. County.

Fiorina announces that she is running for the Senate seat currently held by Barbara Boxer from California.

For many years I felt disconnected from the decisions made in Washington and, to be honest, really didn’t think my vote mattered because I didn’t have a direct line of sight from my vote to a result. I realise that thinking was wrong. I now understand, in a very real way, that the decisions made by the Senate impact every family and every business, of any size, in America. This is what motivates me to run for the US Senate.

Fiorina has surgery for breast cancer at Stanford hospital less than two weeks after her diagnosis. Chief of staff:

Fiorina has an excellent prognosis for a full recovery, and is expected to return to all of the activities to which she is enthusiastically committed.

In Tough Choices, Fiorina presents her side of the HP firing as well as to give a different perspective on leadership, technology, globalization, and sexism.

This book Tough Choices is about business for sure, but it is also about life. It’s about my life, but it’s also about the lives of people I’ve come across in the course of my career.. . I wanted it to be a true reflection of who I am and what I’ve experienced.and how I’ve felt about things.

Hewlett-Packard board forces Fiorina to resign.

While I regret the board and I have differences about how to execute HP’s strategy, I respect their decision.

HP hires Fiorina as CEO although she has no experience in the computer industry. She says the company has plenty of computer people, she plans to focus more on the type of person who should be running the company.

Look, lack of computer expertise is not Hewlett-Packard’s problem. There are loads of people here who can provide that. I’ve demonstrated an ability to pick up quickly on the essence of what’s important. I know what I don’t know. And I know that our strengths are complementary. You have deep engineering prowess. I bring strategic vision, which HP needs. 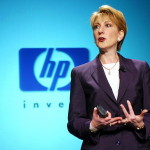 Fiorina is first outsider named CEO and President of HP. Board Member:

She is quite simply the ideal candidate to leverage HP’s core strengths in the rapidly changing information-systems industry and to lead this great company well into the new millennium.

What's this? This is an unbiased just-the-facts news timeline ('newsline') about Carly Fiorina, created by Newslines' contributors. Help us grow it by finding and summarising news. Learn more