Chris Rock has filed for divorce from his wife, Malaak, This is a personal matter and Chris requests privacy as he and Malaak work through this process and focus on their family.

Williams interviews Rock during The Wendy Williams Show about his new film Top Five in which he wrote, directs and stars in.

I play a comedian. How did he do that,right? I’m like a combination of a whole bunch of people, you know I’m a little bit of Eddy Murphy, a little Martin Lawrence, a little Chris Tucker, a little Dave Shapelle a little Kevin Heart. I play like a major comedian in my thing and I’m getting married in a day and I have a big movie coming out. Everything that can go wrong, goes wrong on that day.

I watched them (reality TV) we had this girl Karlie Redd from Love & Hip-Hop is one of the girls in the pillow fight (scene). I love all those shows: Love & Hip-Hop, the Atlanta one, the Kardashians. I studied it. I tried to not make fun of them, but make her a real person. I tried to make Gabrielle a real person that you cared about.

Shepherd chats about playing Rock’s ex-girlfriend in the new film Top Five and gives her reaction to Underwood’s quitting the entertainment business:

You were going to quit, you were so tired of trying to do what you was supposed to do and everybody kept telling you; you weren’t going to do it. You were to physically this and that. 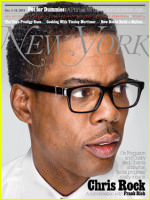 Rock appears on the cover of the December 2014 issue of New York magazine. He talks about income inequality, Bill Cosby, and what he would report on Ferguson if he was a journalist.

I’d do a special on race, but I’d have no black people. Here’s the thing. When we talk about race relations in America or racial progress, it’s all nonsense. There are no race relations. White people were crazy. Now they’re not as crazy. To say that black people have made progress would be to say they deserve what happened to them before.

Rock discusses politics, comedy and Bill Cosby in an interview with New York Magazine. Rock on the recent allegations against Cosby:

I don’t know what to say. What do you say? I hope it’s not true. That’s all you can say. I really do. I grew up on Cosby. I love Cosby, and I just hope it’s not true. It’s a weird year for comedy. We lost Robin, we lost Joan, and we kind of lost Cosby.

Williams interviews Chris Rock and questions him on his family, career and Good Hair 2.

Yeah we’re going to do another one about natural hair. Because there is this big thing in the news, the relaxer companies are going out of business.

Fallon interviews Rock about his upcoming comedy tour, The Black Plague and his hosting duties at the BET Awards.

The Oscars don’t want me, the BET Awards is for everybody. It’s for white people too. It’s the kind of show where you get Neil deGrasse Tyson and Superhead on the same show. Michelle Obama … and Rick Ross sitting next to each other.”

Vanity Fair interviews Rock about the quality of comedy today and if its better.

Do I think comedians are better now? Hell f-ckin’ no. Show me one guy or woman as funny as Rodney Dangerfield or as good as George Carlin, Richard Pryor, Bill Cosby, or Joan Rivers. There are a lot of good comics out there, no doubt, but as far as the quality of the comics goes, I think what you have is a bunch of situational comics. What we have now is black comics that work only black crowds, gay comics that do only gay crowds, and southern comics that only work down South, and so on with Asian, Latino, Indian, midgets, etc. The previous generation’s comics were better because they had to make everybody laugh. Richard Pryor could do The Ed Sullivan Show and play the Apollo. Seinfeld can work any crowd. Ellen can work any crowd. Lopez can work any crowd. And a few more, but the rest of them are just situational comics.

Rock gives interview to Elle about what he learned most from the making of his film Good Hair.

I couldn’t believe how strong these relaxer chemicals were. And I’ve actually had them in my hair I remember the burning. It would be against the Geneva conventions if they used this stuff at Guantánamo.

Rock gives his thoughts about why he walked away from The Chris Rock Show in an interview with O Magazine.

I really wanted to do movies, and it’s difficult to do movies on the side. Only if you’re Oprah can you say, I will shoot between July and September. And let me tell you—if I’m ever Oprah, I’m going to say, Can we shoot for one hour a day? It probably sounds crazy, but I may eventually go back to my show. I miss informing people and being an immediate part of the culture. I miss being able to do a whole piece on reparations. I miss the mix of having Adam Sandler on to sing some nasty song and then talking with Cornel West.

Rocks wins the Grammy for Best Spoken Comedy Album for Bigger and Blacker. Rock wins the Grammy for Best Spoken Comedy Album for Roll With The New.