Paramount releases the trailer for The Big Short. Bale appears on the cover of the January 2015 issue of Esquire UK magazine. He talks about his children. Bale appears on the cover of the January 2015 issue of WSJ magazine. He talks about what he thinks about George Clooney’s concerns about privacy.

It’s like, come on, guys, just shut up. Just get on with it and live your lives and stop whining about it. I prefer not to whine about it.

The Bales are new parents to their second child, a baby boy.  The baby’s name has not yet been disclosed.  Source:

They are truly a supportive couple, he and Sibi are thrilled.

Bale is nominated for Best Actor at the 86th Academy Awards for portraying Irving Rosenfeld in American Hustle.

He’s the consummate con man who cons nobody with what’s happening at the top of his head. It’s like one ear throwing a lifeline to the other one, and nobody is fooled by it whatsoever.

In this comedy drama directed by David Russell, Bale plays Irving, who runs a modest dry cleaning business but also engages in counterfeit and a loan sharking on the side. After meeting the ambitious Sydney (Amy Adams) they soon attract the attention of an FBI agent who is eager to make a name for himself. He manipulates Irving into agreement to put their con skills to use for the bureau. Co-starring Bradley Cooper, Jeremy Renner, Jennifer Lawrence.

He’s the consummate con man who cons nobody with what’s happening at the top of his head, It’s like one ear throwing a lifeline to the other one, and nobody is fooled by it whatsoever. That is so much more interesting than playing [him] for some sort of slick character 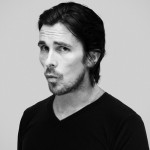 Bale gives an interview to The Talks. He discusses the most fun he’s had making a movie, smaller indie films, and what makes him do the big movies.

I like the emotion. That’s what I do. When I first read a script and decide that there’s something in it that I can try, I like to remember that feeling – and that’s not about hanging out on the set and socializing. I can do that in my own time. I very much enjoy trying to put myself in other people’s shoes.

I didn’t think I was like this. Thanks to my wonderful wife and our little girl, who’s taught me so much more than I’ll ever be able to teach her.

What's this? This is an unbiased just-the-facts news timeline ('newsline') about Christian Bale, created by Newslines contributors. Make it grow it by finding and summarising news. Learn more