Paramount releases the trailer for The Big Short.

Gosling honors McHenry by creating a Vine in which he eats cereal.

Gosling is in negotiations to star in the Blade Runner sequel. The roles is as-yet unknown, though Variety says the likelihood of him playing a son-type character to Deckard seems the safest bet. Harrison Ford is already on board to reprise his role as Rick Deckard.

Mendes and Rosling welcome a daughter into the world. This is the first child for both of them. Source:

She’s absolutely in heaven being a mom. She’s never been happier. She and Ryan are just in awe of this beautiful person they created. It’s a really special time for them.

Mendes and Gosling welcome their first child together. They have a baby girl. The couple has yet to comment on the birth or name of the child.

A source close to the actress reveals she is seven months pregnant with actor, Ryan Goslings, child.  No plans for a wedding are to come.  The source states,

She’s been ready for motherhood for a while now and to be sharing this experience with Ryan is a dream come true for her!

According to Cassavetes Gosling and McAdams did not get along:

They were really not getting along one day on set. Really not. And Ryan came to me, and there’s 150 people standing in this big scene, and he says, “Nick come here.” And he’s doing a scene with Rachel and he says, “Would you take her out of here and bring in another actress to read off camera with me?” I said, “What?” He says, “I can’t. I can’t do it with her. I’m just not getting anything from this.

We went into a room with a producer; they started screaming and yelling at each other. I walked out. At that point I was smoking cigarettes. I smoked a cigarette and everybody came out like, “All right let’s do this.” And it got better after that, you know? They had it out… I think Ryan respected her for standing up for her character and Rachel was happy to get that out in the open. The rest of the film wasn’t smooth sailing, but it was smoother sailing. 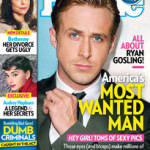 Gosling appears on the cover of People to discuss his love life and obsessed fans. On being a sex symbol:

You just try not to think about it, and you take advantage of the fact that you have these opportunities that you can control-who you work with and what you make.

Gosling plays Stephen Meyers, a presidential campaign press spokesman, in this look at politics behind the scenes, directed by George Clooney. Meyers starts off idealistic, then learns more than he wants to know about dirty politics on the campaign trail. Co-starring George Clooney, Philip Seymour Hoffman, and Evan Rachel Wood.

The Ides of March was an opportunity to work with a lot of actors that are really at the top of their game. I want to direct some day. Watching George is really interesting. He’s sort of possessed by the film while he’s making it.

Mendes and Gosling are spotted on a date together. The couple decided to to go Disneyland and was seen holding hands and getting cozy.

They looked relaxed and seemed to be having a fun time together. Like a dating couple, they always walked very closely, holding hands and their arms touching side-by-side.

What's this? This is an unbiased just-the-facts news timeline ('newsline') about Ryan Gosling, created by Newslines contributors. Make it grow it by finding and summarising news. Learn more