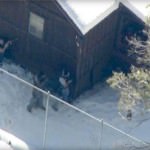 The cabin Christopher Dorner is believed to be holed up in is now fully engulfed in flames, according to CBS2′s Carter Evans, who also reported that tear gas was fired into the house before the fire broke out.

A shot was also fired around that time, and sources told CBS2′s Juan Fernandez that tracks were found leading to a horse corral, which may mean Dorner was able to escape. LAPD Cmdr. Andy Smith Tuesday urged Dorner to turn himself in:

Enough is enough. It’s time to turn yourself in. End the bloodshed

Christopher Dorner
Add your comments below...