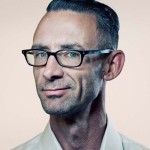 Palahniuk gives an interview to The Talks. He discusses how the world is getting better, his life compared to his fiction, and how he gets people to tell him their darkest stories.

I call it using a little fish to get a big fish. I find one story, one anecdote that I find really fascinating and I will introduce that into conversation. And each time I tell that one small anecdote, there will be someone who has a similar experience from their life, but much more extreme. People compete when they have conversation, they want their input to build on the previous contribution. So, the strange anecdote that I throw out, which is sometimes something from my own life, is instantly eclipsed by an almost identical but more extreme version from someone else’s life. Then a third person will jump in and eclipse that anecdote. I’m recognizing these common events that link people in pretty much everyone’s lives, and I’m looking for the most extreme versions of those.