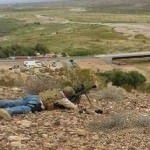 The militia leaders order their followers to “Go get the cattle” from the BLM holding pens. Bundy gives the order around noon. John O’Neill, a Montana militia member, calls his wife and tells her he may not survive the day. The militia, several hundred strong, bring unarmed women and children with them, and, according to an Arizona sheriff, “strategically [place] the women and children at the front of the line to make it difficult for armed agents to open fire.” The militia members also block the highway with their numbers. When they arrive at the BLM compound and cattle pen, just north of I-15, militiamen set themselves up as snipers on the southbound bridge, pointing their rifles at the compound. A small number of BLM agents and National Park Rangers, most in tactical gear and joined by about 30 Las Vegas and Nevada State Highway Patrol officers, respond by pointing their weapons at the visible militia members, while unarmed BLM and NPR employees involved in the cattle roundup stand behind them for protection. The standoff lasts for several hours. Finally, led by Ammon Bundy (and accompanied by a number of unarmed children), the militia forces, many on horseback, begin advancing on the cattle pen and the BLM contingent. One of the militia snipers tells his colleagues, “I’ve got a clear shot at four of them.” Later, people at the scene, including Clark County Deputy Sheriff Joe Lombardo, will say that anything, even the sound of a car backfiring, “might have touched off a bloodbath.” According to the Las Vegas Sun:

There’s no question among those who saw it: The militia members at the scene would have used their guns on the government agents if a fight had broken out.

Clark County Sheriff Doug Gillespie agrees, phoning state and federal officials and telling them that violence is imminent. The law enforcement officials repeatedly ask the advancing militia members to stand down. The standoff precipitates the decision to stand down and halt the confiscation of Bundy’s cattle. Las Vegas police officer Tom Roberts meets with Ammon Bundy and tells him that the BLM has agreed to stand down and release the cattle. Las Vegas police close off I-15 and usher BLM personnel to safety, leaving the militia members to remove the cattle from their pens. Gillespie says:

There have been no shots and nobody has been injured, and my men are working real hard to keep the calm. But emotions are high, and we’re going to make sure that it ends peacefully.

Later Facebook postings by members of the Bundy militia supporters indicate that they were targeting BLM and law enforcement officials. One will write:

They had a bead on the BLM snipers and at the first sound of rifle fire, the blm would have been looking for some new snipers.