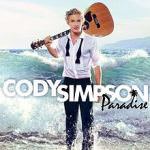 Simpson releases first studio album titled Paradise. The ten track album features singles Got Me Good and Wish U Were Here, which also features a collaboration with Becky G.

The album is called Paradise, and with it, I really want my fans to get lost in their own personal paradise. Everyone is going to have their own idea of paradise, and I want them to see it when they listen to the album. I also put some of my own ideas of paradise in there. Some of the songs have a really cool beachy vibe. I worked really hard on it, and the album is really unique to me. There are also some really fun dance songs on there, So Listen will be a bonus track on the Deluxe Edition.