Supporters of the Ku Klux Klan and Black Panther parties rally together outside of the South Carolina Capitol in Columbia. As the day goes on, rallies quickly turn aggressive despite police presence. Seven people are taken to hospital, while five others were arrested. Protestor:

The Confederate flag does not represent hate. A lot of Americans died for that flag

not an uncommon example of humanity in SC: Leroy Smith helps white supremacist to shelter & water as heat bears down. pic.twitter.com/GoF23r3mRe

South Carolina taking down the confederate flag – a signal of good will and healing, and a meaningful step towards a better future.

In response to protesters who have ask him to stop flying the Confederate flag during his shows, Kid Rock asks Kelly to read a statement on her show:

This is a quote. He said, ‘Please tell the people who are protesting to, quote, ‘kiss my’…ask me some questions—I modified that for cable TV.

A proposal by Rep. Huffman to add language to block the Park Service, which maintains 14 national cemeteries, most of which contain graves of Civil War soldiers, from allowing private groups to decorate the graves of Southern soldiers with Confederate flags in states that commemorate Confederate Memorial Day, is passed by voice vote. The Andersonville and Vicksburg cemeteries in Georgia and Mississippi are affected. Huffman:

The American Civil War was fought, in Abraham Lincoln’s words, to ‘save the last best hope of Earth. We can honor that history without celebrating the Confederate flag and all of the dreadful things that it symbolizes.

I strongly oppose the inclusion of this amendment, which was slipped into the bill in the dead of night with no debate. Congress cannot simply rewrite history and strip the Confederate flag from existence. Members of Congress from New York and California cannot wipe away 150 years of Southern history with sleight-of-hand tactics.

The Park Service funding bill is scheduled for a vote July 9.

South Carolina’s Senate votes in favour of the removal of the Confederate flag that has flown from a 30-foot pole as part of a Confederate Soldier Monument in front of the Statehouse steps since 2000, to the Confederate Relic Room and Military Museum. The 37-3 vote easily surpasses the two-thirds majority needed during a third and final vote that sends the measure to the House of Representatives. Senate President Pro Tempore Leatherman, who voted for its removal says:

That issue had to be resolved.

The South Carolina Senate today rose to this historic occasion, with a large majority of members from both parties coming together in the spirit of unity and healing that is binding our state back together and moving us forward in the right direction. I applaud the Senate’s decisive action, look forward to the Senate giving the bill third reading in the morning, and ask that the House act swiftly and follow the Senate’s lead.

NASCAR is exchanging fan’s Confederate flags with American flags at the Daytona race this weekend. Daytona President Chitwood announces the race will not ban Confederate flags since fans had already purchased tickets for races, but anyone wishing to part ways with their Confederate flag will be offered an American replacement. 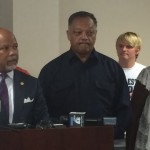 Jackson applauds efforts to remove the Confederate battle flag from South Carolina Statehouse grounds, but says healthcare, education, voting laws and the prison system are areas that should be reviewed.

There is a mood shift in the country, and we must seize upon the positiveness of that mood shift. I think some people who had one position two weeks ago have seen a great light. Let’s seize that great light.

France reiterates the sport’s policy preventing the use of the flag in any official capacity:

In all areas that NASCAR controls on a given race weekend, the flag has no presence,” France said. “We have been clear in support of this position throughout our industry and to those across the country who have called for the eradication of the Confederate Flag.

He also says the sport is looking into how it can reduce the flag’s presence among fans who might fly it in the infield.

We will be as aggressive as possible to disassociate NASCAR events from an offensive and divisive symbol. We are working with the industry right now to achieve that goal.

Friends of @BreeNewsome – I will pay her bail money or any legal fees she has. Please let her know this. #Charleston #TakeDownTheFlag

Jones defends the Confederate flag in an all caps posting on Facebook:

I THINK ALL OF HAZZARD NATION UNDERSTANDS THAT THE CONFEDERATE BATTLE FLAG IS THE SYMBOL THAT REPRESENTS THE INDOMITABLE SPIRIT OF INDEPENDENCE WHICH KEEPS US “MAKIN’ OUR WAY THE ONLY WAY WE KNOW HOW. THAT FLAG ON TOP OF THE GENERAL LEE MADE A STATEMENT THAT THE VALUES OF THE RURAL SOUTH WERE THE VALUES OF COURAGE AND FAMILY AND GOOD TIMES.

OUR BELOVED SYMBOL IS NOW BEING ATTACKED IN A WAVE OF POLITICAL CORRECTNESS THAT IS UNPRECEDENTED IN OUR NATION OF FREE SPEECH AND FREE EXPRESSION. ACTIVISTS AND POLITICIANS ARE VILLIFYING SOUTHERN CULTURE AND OUR HERITAGE AS BEING BIGOTED AND RACIST. WE KNOW THAT THIS IS NOT THE CASE. AND WE KNOW THAT IN HAZZARD COUNTY THERE WAS NEVER ANY RACISM.

WE ARE NOT RACISTS. WE DESPISE RACISM AND BIGOTRY. AND WE THINK THE PEOPLE WHO ARE CREATING THIS “CULTURAL CLEANSING” ARE THE REAL BIGOTS IN THIS STORY…WHEN WE SAY OUR FLAG STANDS FOR “HERITAGE, NOT HATE” AND “PRIDE, NOT PREJUDICE”, WE MEAN IT. AND WE BELIEVE THAT OLD SAYING, “YOU CAN’T KNOW WHERE YOU ARE GOING IF YOU FORGET WHERE YOU CAME FROM.”

COOTER’S IS GOING TO CONTINUE TO SELL OUR SOUTHERN SYMBOLS AS LONG AS THERE IS A COOTER’S. I WILL FIGHT THESE PEOPLE UNTIL HELL FREEZES OVER, AND THEN I WILL FIGHT THEM ON THE ICE.

Walmart removes any and all items made from or containing depictions of the Confederate flag. They apologise for the inclusion of such products in their range.

We never want to offend anyone with the products that we offer. We have taken steps to remove all items promoting the confederate flag from our assortment, whether in our stores or on our website