What's this? This is an unbiased just-the-facts news summary about Conor McGregor, Dana White, Khabib Nurmagomedov, extracted from the original article by Newslines' contributors. To see the newsline of each topic, click the links below. Learn more 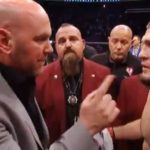 After defeating McGregor, then brawling in the crowd, and as Las Vegas metro police attempt to restore order, Nurmagomedov climbs back into the octagon and pleads with White to give him his belt: “Put my belt on me.” White refuses, fearing an even greater safety issue. He explained that angry fans would pelt him with anything they could get their hands on. Khabib continues to protest: