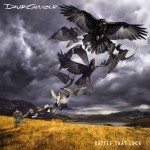 Gilmour announces Rattle The Lock, his fourth solo album, to be released on September 18. The album’s title track and first single, will be unveiled July 17th, the same day the album will be available for preorder at Gilmour’s official site. The 10-track LP features lyrics by Samson, and contributions and co-production by Manzanera. Samson’s lyrics are inspired by Book II of John Milton’s Paradise Lost. Gilmour:

Rattle That Lock was inspired musically by the sound that’s played on French railway stations before they make an announcement. It’s a four-note jingle. Every time I heard it it made me want to start dancing. I held my iPhone up near the speaker and waited for the next announcement. Took a sample for that and that’s what I’ve used on this track.