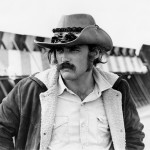 Hopper gives an interview to The Talks. He discusses the Venice Film Festival and winning the Best First Film Award.

I bullshitted everybody and told them all my dreams and things I was going to do. And what happened afterwards? I became a total failure. I was full of shit and that’s the end of it.