What's this? This is an unbiased just-the-facts news summary about Denzel Washington, extracted from the original article by Newslines' contributors. To see the newsline of each topic, click the links below. Learn more 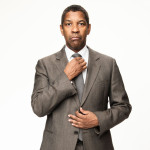 Washington gives an interview to The Talks. He discusses whether he likes playing the bad guy, his spirituality, and turning down roles because they typecast him.

Absolutely. My career is based on saying no. Sidney Poitier told me many, many years ago that the first four or five movies that you do will determine how you’re perceived in the business. So I was very blessed that the second movie I did was with Norman Jewison, the third movie I did was with Sidney Lumet, and the fourth movie I did was Cry Freedom with Richard Attenborough, for which I was nominated for the first time. I was off to the races. There were other movies that I could have done and I didn’t do.