What's this? This is an unbiased just-the-facts news summary about Doctor Who (TV), extracted from the original article by Newslines' contributors. To see the newsline of each topic, click the links below. Learn more 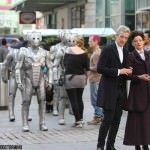 The BBC reveals that the Cybermen are to return to the 8th season of Doctor Who. The show’s official Twitter account tweets a behind-the-scenes picture showing Gomez with Capaldi in Cardiff and Cybermen behind them. It is believed they were shooting scenes for the Series 8 finale.

The picture is tweeted again a few hours later with the words: “In case you missed it … Peter Capaldi, Michelle Gomez and some familiar faces, earlier today!”