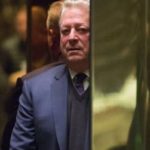 I had a lengthy and very productive session with the President-elect. It was a sincere search for areas of common ground. I had a meeting beforehand with Ivanka Trump. The bulk of the time was with the President-elect, Donald Trump. I found it an extremely interesting conversation, and to be continued, and I’m just going to leave it at that.