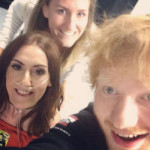 He was so lovely and genuine, he had a great sense of humour and was really easy to get on with. He signed my programme and we took some selfies together. He smelt amazing. A few months ago, I was so unwell I was worried if I’d ever make it to Ed Sheeran’s gig, but I did and it was incredible and I also got to meet him backstage. My life is now complete.

There are no bands or singers who become successful without overwhelming marketing. There are no surprise success stories. Everything is stringently controlled, obvious and predictable and has exactly the same content. So, we are now in the era of marketed pop stars, which means that the labels fully control the charts, and consequently the public has lost interest. It’s very rare that a record label does something for the good of music. Thus we are force-fed such as Ed Sheeran and Sam Smith, which at least means that things can’t possibly get any worse. It is sad, though. There’s no spontaneity now, and it all seems to be unsalvageable.

Sheeran gives an interview to Time Out Hong Kong. He discusses talking to the media, the Brit Awards, and fame.

[talking to the media] is not too bad in places like Hong Kong, because people are very polite and not dinky [cheeky]. But in England, I’ve just learned to not trust journalists. I just found I was really pally with some of them, and we’d go out for drinks every now and then. And for the first four months there’d be no stories and then every now and then, something would pop up. I’ve just learned not to do it. Everything becomes a quote.

Sheeran is interviewed by Seacrest during the program. He talks about performing at the KIIS FM Jingle Ball:

It was a good event to play, but all I did was smile a couple of times and the papers made it out for me being some goofy teenager being there all happy. It was fun, but for me it was work because I was performing. I’m like five-foot-eight and most of those girls are like six-foot-one. I felt like a hobbit in the Elven Kingdom.

Sheeran performs an acoustic version of Thinking Out Loud during On Air With Ryan Seacrest from his album X.

Seacrest interview Sheeran during On Air With Ryan Seacrest and questions him about why he dissed Miley Cyrus at the VMAs.

Sheeran performs All Of The Stars during The Ellen Show to promote his album X.

Seacrest interviews Sheeran during On Air With Ryan Seacrest and questions him on what it was like to work with Hilary Duff.

The only time I was available was 1 a.m. and she was a trooper. She came in, she vocaled it, and yeah, I’m very, very happy with the results. And I hope she is too!

Sheeran covers Beyonce’s Drunk In Love during On Air With Ryan Seacrest to promote his album X.

Sheeran performs Sing and Thinking Out Loud on the Today show from Alright.

It’s a Bill Cosby quote: “The key to failure is to try and please everyone.” People say, “This is my favorite song. You should write another song like that.” At the end of the day, f-ck them. Be selfish. Why bother to please everyone? Please yourself. The rest will follow.

Sheeran performs You Need Me, I Don’t Need You during Capital FM’s Summertime Ball from his album +

Seacrest interviews Sheeran during On Air With Ryan Seacrest and questions him about the artist he most wants to work with.

I went in with Timbaland just to kind of play him music and talk about stuff, but he was doing the [Justin] Timberlake and Jay Z albums at that time, so we didn’t get to make music. So I’d like to go in with him in the future.

Lovato and Sheeran perform a duet of Sheeran’s Give Me Love at the Hollywood Bowl.

Lovato performs with Ed Sheeran live on his song Give Me Love at 104.3 MY FM’s My Big Night Out concert. During his performance Sheeran says that this is something he has never done, before Lovato is brought out to sing with him.

I talked to Ed about collaborating and we have talked about writing together, maybe doing a song or performing together at some point

Sheeran buys a police station, to convert into a youth center, for his home town of Framlingham, Suffolk. Sheeran has spent more than £1 million on the home town that he credits for getting him started in music. His dream is to retire in his home town and give back by running the community center.

Sheeran appears in commercial and advertisements for Beats Solo2 headphones. The commercial features the song, Don’t from X album.

Sheeran performs All of the Stars on, The Voice with Christina Grimmie. Grimmie says:

Thank you Adam Levine for wanting to sign me to your label because after 5 years on YouTube, not a single label out there would sign me. And he has known me for only a couple months and would you look at that. Adam believes in me, as did my team Grimmie all these years.

Sheeran performs a full Multiply Concert including songs from his previous album + live from Dublin to promote his album X.

Sheeran performs The A Team during the iHeart Music Awards show promoting his album +.

Sheeran announces he and The Game plan a joint album to be released in 2015. The Game and Sheeran only planed to collaborate on one song together but, when they got in the studio they recorded seven instead.

Ed came up with the idea to start working on a joint album, and we started doing it. He was on that guitar. Acoustically, he’s a genius, man, so when he does that, what comes out of me is songs like (The Game hits) Dreams and Hate It or Love It and My Life. The songs that we got, they’re real songs. And I can’t wait for people to hear ’em.

Sheeran announces U.S and Canada tour dates for his new album X.  There are 14 stops on the two month tour. Additional dates added to the tour are expected.

Seacrest interviews Sheeran during On Air With Ryan Seacrest and questions him about his inspiration for the single Sing.

I feel like I was veering off in one direction with that song to kind of make it a very R&B song. I wanted to pull it back and make it English, which is why I put the rap in it. [Sing is about] Someone I met in Vegas. It was last summer. We went out for food afterwards sushi.

Seacrest interviews Sheeran during On Air With Ryan Seacrest. During the interview, Seacrest asks him questions about his album, working with Elton John, and his American tour with Taylor Swift.

I was in America for 11-and-a-half months, which as an Englishman is quite a tough thing to do. I lived in Nashville for six months, I lived in L.A. for three months and New York for two.

Sheeran is a Grammy nominee for Best New Artist.

The Grammys are the Holy Grail…I just wanted the album to go gold in England. That was the main goal.

Sheeran performs Give Me Love during The X Factor UK to promote his album +.

Sheeran and Elton John perform The A Team during the Grammy Awards to promote his album, +.

Sheeran performs The A Team during On Air With Ryan Seacrest to promote his album +.

Seacrest interviews Sheeran during On Air With Ryan Seacrest and questions him about the meaning behind his single The A Team.

The A Team subject matter doesn’t exactly lend itself to radio play, but it’s all seems to be working out. I’m not really questioning it too much!

The couple team up to sing a rendition of Kenny Rogers and Dolly Parton’s classic Islands in the Stream and Sir Elton John and Kiki Dee’s classic hit Don’t Go Breaking My Heart before heading back to their hotel in the early hours. Taylor, and Ed Sheeran then joined Styles and his One Direction bandmates to sing Backstreet Boys’ 1998 hit I Want It That Way. Styles:

Last night was the best thing I have ever done. We’re on an Island over the Stream…

Sheeran performs a full concert including The A Team, Grade 8 and Drunk at the ITunes Festival to promote his album +.

Swift releases her single, featuring Ed Sheeran, Everything Has Changed, from her album, Red.

Sheeran performs Lego House during the Brit Awards show to promote his album +.

What's this? This is an unbiased just-the-facts news timeline ('newsline') about Ed Sheeran, created by Newslines' contributors. Help us grow it by finding and summarising news. Learn more