Mayer and Weir are interviewed by Rolling Stone, about their upcoming tour together as Dead & Company. The band started discussing the tour with Mayer in January but did not book it until after the Grateful Dead’s highly successful Fare Thee Well gigs with Phish in Santa Clara, California and Chicago. Mayer:

I remember writing Bob afterward going, ‘Hey, enjoy the afterglow. To be quite honest, those [Dead & Company] dates came out in groupings not because we were trying to stage this really high-energy, suspenseful plot of dates — we were putting them together as they were coming out.

Mayer says he has been practicing nonstop, attending what he calls “Grateful Dead University.”

You have to understand that particular song’s flow. And then I pick up the guitar and find out kind of where it lives on the fretboard, and then I sort of go a little deeper. Each song gets that layered thing, so that by the time I really know it, I know how the song goes, what the sort of guitar approach is, but then also what the sort of ethic of the song is…Grateful Dead songs are so much fun to play. And some of them are as fun as they are hard to play. Part of the challenge is not disappearing into how much fun it is — [where] you forget that this is actually a highly complex composition.

John’s enthusiasm for this is amazing — I couldn’t believe it,” he says. “He learned the songs, has great enthusiasm, and he’s a great guitar player. So he fits in perfectly.

Mayer accepts the ALS Ice Bucket Challenge after being nominated by Jason Becker, who has ALS.  He nominates Eddie Van Halen and David Lee Roth.

That is very refreshing.

Seacrest interviews Mayer during On Air With Ryan Seacrest and questions him about his Valentines Day plans.

This is my Valentine right here, Dr. Gerald Berke, from the UCLA Head and Neck Center,” the “Your Body Is a Wonderland. He’s my valentine. Wouldn’t you say? The guy who gets you singing again, so we’re going to have a nice little night in Brentwood.

Mayer hires Carter as his manager, the first time Carter’s will work with a major rock artist. A source says they met through mutual friends:

It’s just getting started but great new things will be announced as the year progresses. Perry says she wants a normal relationship that doesn’t always involve the media.

I keep enough to myself. I’m going to go on dates and movies and dinners and when I do it’s not because I’m trying to garner any kind of publicity, it’s because it’s something that is just an inevitable byproduct of this life. It’s never my main focus, it’s never intentional. My ideal date is just dinner and a movie. It’s so normal. And a hike, we love to hike.

Mayer performs Slow Dancing In A Burning Room during The Late Show with David Letterman to promote his album Continuum.

The artist releases his single, On The Way Home, from his album, Paradise Valley.

The artist performs the song, Slow Dancing In A Burning Room, from his album, Continuum, during the program.

The artist performs The Age Of Worry, from Born and Raised, during the show.

The artist performs the song, Wildfire, from his album, Paradise Valley, during the program.

The artist performs Queen Of California, from Born and Raised, during the show.

The artist performs the song, Dear Marie, from his album, Paradise Valley, during the program.

The artist performs Something Like Olivia, from Born and Raised, during the show.

The artist performs the song, If I Ever Get Around To Living, from his album, Born and Raised, during the show.

The artist performs the song, Born and Raised, from his album with the same title, during the show.

The artist performs On The Way Home, from his album, Paradise Valley, during the program.

The artist performs the song, Paper Doll, from his album, Paradise Valley, during the program.

The artist performs the Grateful Dead song, Going Down The Road Feeling Bad, during the program.

The artist releases Who You Love, featuring Perry, from his album, Paradise Valley. Mayer:

I started singing ‘And my girl, she ain’t the one I saw coming. Sometimes I don’t know which way to go. And I tried to run before, but I’m not running anymore.’ In 2013, modern-day times that’s sweet. Because there’s so many other things to occupy your time that you can do for yourself. That to say, I tried to be alone but I can’t. This is sort of our generation.

Mayer performs Someone Like Olivia during The Ellen Show to promote Born And Raised.

Perry and Mayer split. The couple had been dating for the past seven months. Before splitting, the couple spend Christmas together with her family. Perry:

Sometimes you have to go through all this sh*t to get your grips on life. You have to go through the mud in order to find that peaceful place. I’m living in the now and not fantasizing about the past. I have a lot of respect for [John] still, and I know it goes both ways. There’s no bad blood, but I’m sure there will be inspired songs.

The artist releases his single, Something Like Olivia, from his album, Born and Raised.

The artist releases Queen of California, from his album, Born and Raised. Mayer says the song is about:

being able to have a hopeful vibe about something again… it’s actually about getting over stuff.

Perry and Mayer are dating after they were spotted leaving the Chateau Marmont in Los Angeles for dinner. The pair have been chatting on the phone and have gone out a few times – but they’re taking things slow. She wants a normal relationship that doesn’t always involve the media. She doesn’t want to reveal a lot of things about her personal life only bits and pieces. Source:

I don’t think either of them are trying for anything serious right now. She’s not talking like he’s The One. She’s comfortable around guys who understand the craziness of that world, which he definitely does.

The artist releases Shadow Days, from his album, Born and Raised.

The artist releases his single, Half of My Heart, from his album, Battle Studies.

The artist releases Who Says, from his album, Battle Studies.

Around the time I was making Continuum, I was having a little sex, and I was listening to Miles Davis’ In A Silent Way. I was naked and playing the guitar post-coitus. I was fiddling around with the guitar, and I went (singing) ‘Who says I can’t get stoned…’ And it was lovely.

It is always an honor to be a musician. 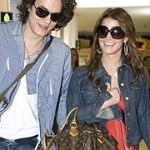 Simpson and Mayer are now dating after being spotted at his Continuum tour in Australia. The couple was also spotted on Byron Beach.

You could tell he was telling her jokes and she was giggling and stuff. He wasn’t bothered by anything else that was going on, he was just concentrating on her. They were walking really close, holding hands. They seemed great together.

Mayer wins the Grammy for Best Male Pop Vocal Performance for Waiting On The World To Change, and Best Pop Vocal Album for Continuum.

I’m nervous. This is amazing.

The artist releases Waiting On The World To Change, from Continuum. Mayer ‘s inspiration for his song:

I wanted to start a debate. Most of us are happy to wait for things to change. Mayer wins the Grammy for Song of the Year and Best Male Pop Vocal Performance for Daughters.

I loved a girl a lot, but she couldn’t trust men. And if you trace it back, it was the first man in her life she couldn’t trust. I know this song sounds like I’m just sitting around the house, spitballing, thinking of really lofty things to think about, but it really is the result of tracing it backwards to find out how I could possibly love this person. And the answer is: you can’t. Because someone else didn’t before you.

The artist releases his single, Clarity, from his album, Heavier Things.

The artist releases Bigger Than My Body, from Heavier Things.

Mayer wins the Grammy for Best Male Pop Vocal Performance for Your Body Is a Wonderland.

This moment is kicking my ass.

The artist releases his single, Your Body Is A Wonderland, from his album, Room For Squares.

It’s really a song about when you could love someone enough to jump into bed at 4 and get out when it’s dark, like when you go see a movie and you walk out and it’s dark out – same thing except instead of the movie it’s sex.

The artist releases No Such Thing, from his album, Room For Squares.

What's this? This is an unbiased just-the-facts news timeline ('newsline') about John Mayer, created by Newslines' contributors. Help us grow it by finding and summarising news. Learn more